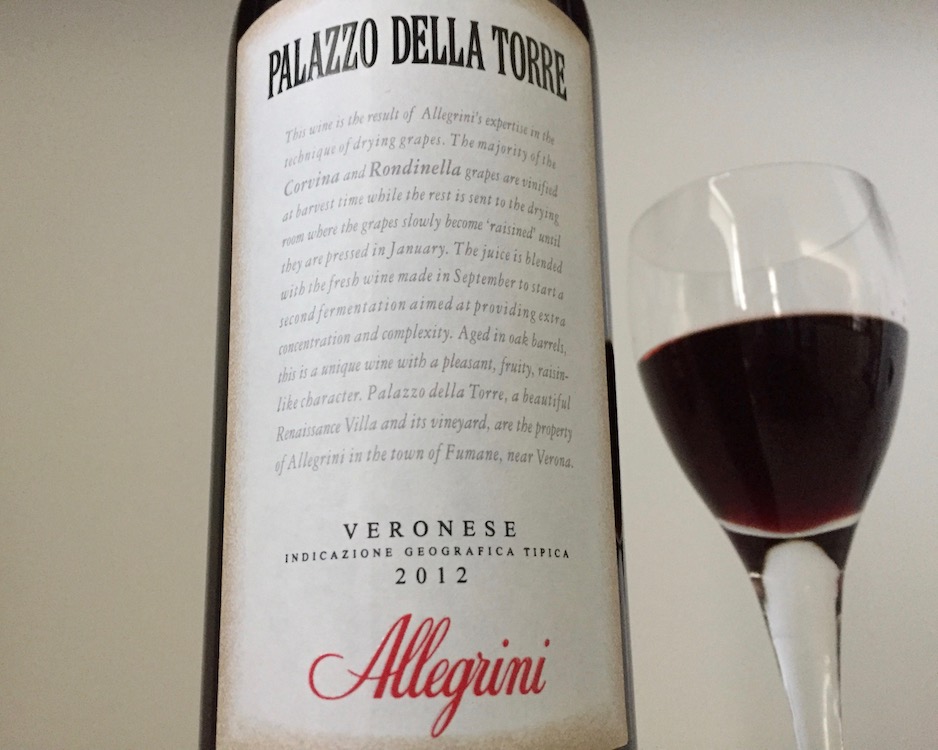 Hey, it’s warm outside.  Hence,  during our recent afternoon office tastings, we’ve been sampling chilled whites and rosés.  One after another.  In rapid succession.

And while no one is actually complaining,  one of our colleagues did ask,

“when are we going to try some red?”

For the most part, you won’t find this at your neighborhood wine shop.  You will find it in your grocery store’s Italian section.   Most groceries have at least a modest Italian selection and if they do, they’ll probably have this.  Produced at a 16th century villa near Verona (sign me up for that tour), it’s been a grocery store staple for years.

Palazzo Della Torre fulfills all of the Pat The Wine Guy requirements.  The price lands in the middle of our $15-$30 sweet spot.  It’s easy to find.  And the taste is consistent.

A blend of two Italian grapes that admittedly I’ve never heard of, Corvina and Rondinella, it’s a medium-body, earthy red that works quite well with a variety of Italian food.  I personally haven’t tried it with barbeque but other reviewers say this is “sturdy” enough to go with spicy BBQ too.  Makes sense.

While I think it offers a nice QPR (Quality-Price Ratio), others speak much more highly of it.  The authoritative Wine Spectator has named Palazzo Della Torre to its annual top 100 list SIX times.

I suggest you pour a glass, whip up (stir up?) some risotto or baked lasagna, and judge for yourself.  And yes, this was but a momentary departure.  Back to the chilled whites and rosés in our next review/recommendation.